Today we will make a Mushroom House Drawing with help of oil pastels. We will try to make the picture of the frog house as simple and straightforward as possible, for the children, and draw everything step-by-step. After reading this article you can make a cute frog house drawing easily. Note that this frog house drawing is for kids and beginners.

Hello little friends, The house we will draw today is the house of a frog. The mushroom house is the home of the fantasy world of small children. In reality, the frog house has no existence. But if we think with the world of children’s imagination, the house of the bank is a very important house. In fact, frogs do not live in frogs houses. In fact, living in a bank house is a good witch. They help all the kids. We have the real world after the frog house world. Let’s start Mushroom House Drawing With Color Step by Step For Kids

Do you know what a mushroom house is? In reality, it is nothing but a kind of fungus. This type of fungus grows in rotten dirty places. These are more common, especially in rural areas. Many people also know it as a mushroom. These again we can take as food. But we will not use poisonous fungi as food. Let’s not talk too much, little friends, this time we start drawing.

Mushroom House Drawing With Color Step by Step For Kids :

Here are the materials we need to draw this Mushroom House Drawing.

First, we need a white drawing paper. You will draw margins with the help of scale. There will be a margin of half an inch around the page. You need to make sure that the page is not dirty and untidy.

Draw the roof of the frog house.

First, we have to draw the top of a hat. Which looks a lot Like waves. The middle part looks a little higher and lower and looks like a small hill.

The wall of the frog’s house is not straight. That is curved. Usually, it does not exist in reality. So you can draw the wall as you wish.

The windows will be made of wood. Make the window in such a way that it looks as if the window is closed with wood. Permanent windows cannot be opened and closed.

Draw a picture inside the roof.

Draw a picture of the highlands.

Drew a chimney on the roof of the Mushroom House Drawing.

First of all, what is the chimney? Many children do not know what a chimney is? There is nothing in the chimney, the part of the house from which the smoke comes out is called the chimney. This time we will draw on a chimney that is emitting smoke.

Draw a few small hills around.

Now the picture of our frog house has been completely drawn. Now we will draw some small raised parts around the house. Which look a lot like small hills.

Paint the roof of the house red.

Give orange color on the very edge of the roof of the house.

Roof bits we’ll do in other colors. The roof bit is the very end of the roof. There we will give the color orange. Here you can use an orange rule pencil if you want. There is no need to rub with tissue paper when using a rule pencil.

Paint the inside of the roof blue.

Paint the inside of the roof red.

Paint the walls with yellow oil pastel. Then lightly brown the bottom. Paint in such a way that the bottom of the wall looks a little brown. Paint the window wood brown.

Paint the inside of the door purple.

Give light yellow on the ground of Mushroom House Drawing.

We will paint light yellow on both sides of the road in front of the house. Remember that the yellow color should not be too thick.

Paint green around the house on yellow.

A little while ago you put green on the place where you gave yellow. Give green color in such a way, greener in some places and light green in some places. If you want you can draw grass with the help of more green color.

The small districts around the house can be painted as happy as orange-red. We painted the two hills on the right red and the hill on the left orange. Moreover, we have painted the stairs on the street orange. Draw the orange color on the road and stairs from left to right.

We will give ash color in the smoke. Smoke will be like a cloud, somewhere a little more, somewhere lighter. Give the color of the chimney blue on one side and orange on the other.

Draw clouds on both sides of the house and a rainbow on top.

Draw clouds on both sides with the help of blue oil pastel. The edge of the cloud will be bluer and the middle side will be light blue. Then draw a rainbow on the roof of the house with the help of seven colors.

Now our drawing is done, now we will highlight only the outline of the house with the help of a marker pen.

Look, our mushroom house drawing is completed. There are many more ways to make pictures like this on our website. And many more pictures will come later. So all of you bookmark this website in our browser and subscribe to our YouTube channel Draw With Pappu.

You must draw the picture and send me your mushroom drawing a picture with help of the link given below. I will definitely try to give your picture in my story.

Watch How to Draw Mushroom House Step by Step For Kids :

Read More: How to Draw a Lion 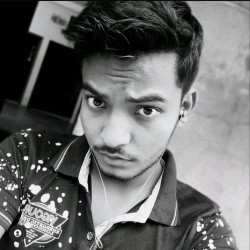